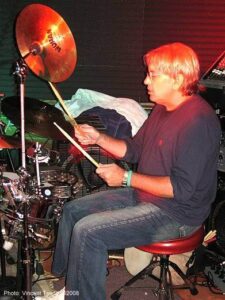 The Celebration and Music started around 3pm and lasted until after 12am - Bands and Musicians donating their services.

Line-up for the day:

"The Lucky Ones" - the band formed after Bryans 2001 surgery, songwriter partners and players. "Mike Veal Band" - Mike scheduled the performers and was the MC and Host for the event. "Boss Tweed" - old Atlanta band put back together to honor Bryan and his friendship. "Tommy Dean and the League of Decency" - all old friends of Bryan. "Ichiban Allstar Band" - Bryan worked at Ichiban Records as head of licensing department and staff drummer and staff producer. The band was a collection of studio session players from the Ichiban era. Sandra Hall, Theodis Ealey (Ichiban artists), Lola Gully (Bryan produced) and William Bell (Bryan toured with) vocalized with the big band. "Randall Bramblett Band" - Bryan produced a Randall Bramblett CD and had played drums in Randall's band. "The Georgia Satellites" - chose to honor Bryan's friendship by playing a set. "Java Monkey" - band Bryan played with for over 10 years, with members of former Mose Jones band. "Francine Reed" - (known for her touring and recording with Lyle Lovett, as well as Willie Nelson and others) was backed up by Java Monkey - Bryan was the first one to get a record deal for Francine. He produced 4 CD's for Francine while at Ichiban Records and KALA studios.